Archives for Past Events

PCWASA A LEADER IN WATER RECLAMATION AND REUSE

Now that the Biosolids Treatment Facility has opened at the Peachtree City Water & Sewerage Authority’s Line Creek Plant, the facility now features the reuse, or recycling, of both wastewater and biosolids that result from the site’s water reclamation processes. Talk about a win-win.

For years, the Line Creek Plant has provided permitted spray irrigation of treated wastewater at nearby Planterra Ridge Golf Course and other are recreational facilities. The treated wastewater is completely safe and provides an ideal supplement, or in some cases replacement, for potable water that’s often used for golf course irrigation.

The Line Creek Water Reclamation Plant is a regular sludge activated plant; however, the plant features advanced filters that treat wastewater after the sludge activation stage of the process. In addition, the plant has triple backup ultraviolet (UV) disinfection to complete a highly advanced form of wastewater treatment.

For that reason, industry regulators at the Georgia Environmental Protection Division (EPD) permit PCWASA to send some of the treated wastewater (effluent) from the Line Creek Plant to a holding pond at Planterra Ridge for eventual spray irrigation on the golf course.

The other two means of permitted wastewater discharge from the Line Creek Plant include an amount that is put back into Line Creek, and a required amount put back into Flat Creek at the site of the old wastewater treatment plant outfall, in order to maintain and preserve valuable wetlands downstream.

Over the course of the next year or so, Peachtree City residents most likely will be unaware of the modern marvel at work beneath their feet, thanks to a partnership between the Peachtree City Water and Sewerage Authority (PCWASA) and RedZone Robotics. RedZone’s advances of science may resemble science fiction, but will no doubt gather valuable facts and data to aid in the future planning of capital projects for the utility’s sewer system.

During the February PCWASA Board Meeting, the Authority entered into a contractual agreement with RedZone Robotics for data acquisition, software, and inspection services. Through its Y.E.S. (Your Entire System) Program, RedZone also will combine the new data on the integrity of the PCWASA sewer system with existing information the Authority already has gathered to date via other inspection methods, creating a centralized system of record for the utility’s abundant sewer system.

The timeline of the data gathering process by RedZone’s Solo Unmanned Inspection Robots is approximately 15 months from the time the work kicked off in mid-April. However, the cost of the project for PCWASA is being spread over seven years, with favorable payment terms provided by RedZone.

The speed in which the data can be gathered by these technologically advanced robots, which are lightweight systems with onboard intelligence and full coverage tracking, is unmatched in the industry. That benefit, coupled with the flexible financing and payment plan for RedZone’s services, make this partnership advantageous to the Authority on both accounts, say Authority officials.

“The data that would have taken us 15 years to gather by conventional televising methods will now take only 15 months,” says Stephen Hogan, PCWASA General Manager. “During the early years of the Authority’s history, a portion of our sewer system was built originally by developers, so we’d like to have a better idea of the condition of these older portions of our infrastructure, before we prioritize scheduled rehabilitation, where needed.”

Based in Pittsburgh, Pennsylvania, RedZone Robotics provides high efficiency pipeline inspection products and services for utilities and municipalities throughout North America, with robots that look like they could star in a science fiction film, says Hogan. RedZone’s work will allow PCWASA to maintain and enhance one of the most valuable assets of its sewer system – the sewer lines in the ground.

Ken Wolf, Vice President and corporate officer for RedZone Robotics, says PCWASA “has a proactive attitude toward the collection system infrastructure, which should serve as a model for best practice sewer system stewardship.”
Wolf also notes that sewers are critical assets, and at a time when many still choose to neglect them, PCWASA understands that the fundamental need for establishing the lowest cost, longest useful life plan for their abundant sewer system is accurate and complete information.

“They will quickly have access to the information required to use the funds available to manage the collection system in the best possible manner for the citizens of Peachtree City for many years to come,” concludes Wolf. 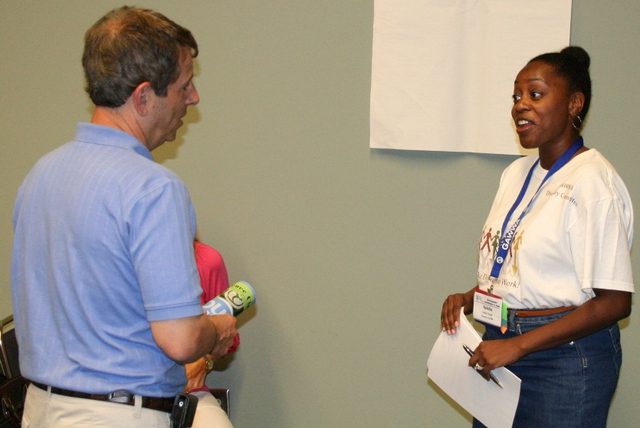 Keisha Lisbon Thorpe (right), Division Manager of Technical Services for PCWASA, has been selected to serve as a Junior Trustee of the Georgia section of the American Water Works Association.

The American Water Works Association (AWWA) is an international non-profit association that is the authoritative resource on safe water and the leading industry association for water professionals. Now, PCWASA Division Manager Keisha Lisbon Thorpe, P.E. is among its leadership.

Lisbon Thorpe was recently selected as a Junior Trustee and Executive Committee Member of the Board of Directors for the Georgia Chapter of AWWA. This responsibility is in addition to her work for GAWWA as Co-Chair of the Georgia Model Water Tower Competition – an educational engineering challenge for middle school students. The Competition is a joint project of Georgia AWWA and the Georgia Association of Water Professionals (GAWP).

Lisbon Thorpe chaired the Diversity Committee of GAWP, prior to being selected by her peers to serve as a GAWWA Junior Trustee. Her two-year term as a Junior Trustee commenced this summer, when she began to oversee GAWWA’s communications and scholarship programs, among other leadership responsibilities.

With a Bachelor’s Degree from North Carolina A&T and a Master’s Degree in Chemical Engineering from the University of Florida, she is a registered Professional Engineer (P.E.) in the state of Georgia, who also holds a Class I (the highest in the profession) Public Water Supply System Operator’s License.

“Keisha not only provides leadership and expertise as Division Manager of Technical Services for the Authority, but she also is very well respected by her peers and other water professionals within our industry,” says Stephen Hogan, PCWASA General Manager. “We are very fortunate to have her on staff at the Authority, and I know she will be just as valuable of an addition to the Georgia AWWA Board.”

The Georgia F.O.G. Alliance recognized the Peachtree City Water and Sewerage Authority (PCWASA) at its annual awards holiday luncheon in December as a founding member of the industry organization. The Alliance was founded in 2001, with PCWASA as one of the few 30 or so utility members in the state to have been a part of the organization since day one.

Xavier Davis, GISP, who is the FOG Program Coordinator for PCWASA, is serving as Vice President of the Georgia F.O.G. Alliance this year, after serving as Treasurer since 2008. Keisha Lisbon Thorpe, P.E., who is the PCWASA Division Manager for Technical Services, joined Davis at the awards luncheon to pick up this honor on behalf of the Authority.

PCWASA is a founding member of the Georgia F.O.G. Alliance, says Davis, because this non-profit industry trade group provides public information and advocates public education, as well as networking opportunities for municipalities and utilities, regarding Fats, Oils, and Grease (FOG) Programs. The Alliance was founded to help local governing authorities such as PCWASA to start or maintain effective FOG Programs, as a unifying voice through association with fellow FOG prevention professionals.

The PCWASA FOG Program provides proper disposal tips – through educational materials and instruction – to industrial, commercial, and residential customers. Commercial and industrial customers are required to maintain proper grease traps, among other measures to protect the integrity of the Authority’s sewerage system, while residential customers are encouraged to “think before pouring grease down the sink,” and instead dispose of fats, oils, and grease in sealed containers in the trash.

The Peachtree City Water and Sewerage Authority (PCWASA) is fortunate to have the professional expertise of approximately 40 employees with various responsibilities within the utility’s wastewater collection and treatment system, says General Manager Stephen Hogan. It is a diverse and accomplished work force, he adds.

One of those leaders on the PCWASA staff is also a leader within the Georgia Association of Water Professionals (GAWP). Keisha Lisbon Thorpe, P.E., the Division Manager for Technical Services at the Authority, moderated a technical session on Diversity during the recent GAWP Annual Conference & Expo in Savannah. She also chairs the Diversity Committee for the Association.

As a result of Thorpe’s guidance, the technical sessions on Diversity at the GAWP Annual Conference featured panel discussions that included the topic of “The Why and How of Diversity in the Water Industry.”

STEER CLEAR OF THE FOG

The Peachtree City Water and Sewerage Authority (PCWASA) is encouraging its customers to prevent FOG from entering – and eventually damaging – home plumbing, the Authority’s sewer system, and Peachtree City’s environment.

Fats, oils, and grease (FOG) are derived from living cells of animal and vegetable matter, produced during food preparation at restaurants, cafeterias, and residential homes. After food is prepared and eaten, FOG can remain on cookware and dishware. As a result, these potentially harmful materials can enter into the sewer system from a kitchen drain.

“If fats, oils, and grease are not properly disposed of over time, they potentially can lead to sanitary sewer backups and overflows in our community,” says Xavier Davis, FOG Program Coordinator for PCWASA. “Just as foods high in cholesterol and saturated fats can clog your arteries, fats, oils, and grease can clog our wastewater collection system.”

Subsequently, when sewer lines are clogged with FOG, the PCWASA has to address the additional problems that backups and overflows can cause – damaged property, increased cleanup costs, and penalties from regulatory agencies for permit violations and/or noncompliance.

A few consumer tips can help PCWASA customers prevent the negative impact of FOG on their own plumbing, the Authority’s wastewater collection system, and the environment:
1. Put used cooking oils and fats, oils, and grease in tight-sealed containers, which can then be thrown away in the trash.
2. Put food scraps from cookware and dishes in the trash as well, rather than down the kitchen drain.
3. Wipe pots and pans with a dry paper towel prior to washing.

“With the help of our customers, we can greatly diminish the amount of fats, oils, and grease entering our system, which will in turn reduce our maintenance costs and system repairs,” says Stephen Hogan, PCWASA General Manager. “By properly disposing of these harmful substances, customers will protect their household plumbing, our community’s sewer system, as well as our environment.”