PCWASA RECOGNIZED FOR 25 YEARS OF SERVICE 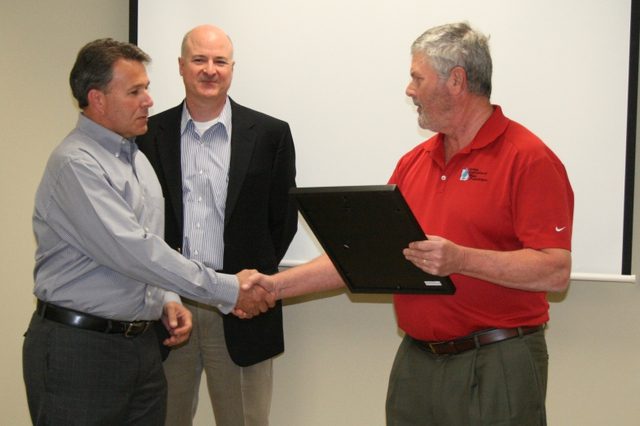 The work of the Peachtree City Water and Sewerage Authority (PCWASA), its board and staff, received high praise from the state’s leading industry association during the utility’s 25th Anniversary celebration, held recently to coincide with an open house at the Authority’s headquarters and Rockaway Wastewater Treatment Plant.

Executive Director Jack Dozier and Deputy Director Pam Burnett, of the Georgia Association of Water Professionals (GAWP), were featured guests at the PCWASA anniversary luncheon, presenting a proclamation to the utility’s board and staff for 25 years of service to Peachtree City and the water/wastewater industry. During the presentation of the proclamation, Dozier noted that PCWASA has supported the health and economy of the Peachtree City community by providing efficient and cost-effective wastewater management facilities to serve the public and to protect the environment.

“Most people in our country take for granted the availability of safe drinking water and wastewater services, but approximately 2 million deaths occur annually across the world as a result of unsafe or unattainable water or wastewater services,” says Dozier. “(PCWASA) does an outstanding job in sewer collection and treatment, so your customers don’t have to worry about the quality of your system. This (PCWASA) staff is recognized by fellow professionals as being among the best in the state.”

As noted in the proclamation, Dozier praised PCWASA for providing professional services in five specific areas that warranted acclaim: (1) Environmental stewardship through superior practices of wastewater treatment, reuse, and recycling; (2) Fiscally sound operations through economic ups and downs; (3) Continuous enhancement of services, facilities, and performance; (4) Leadership in public education and use of technology; and (5) Exemplary cooperation with other water management agencies.

In addition to hosting an employee luncheon to commemorate the 25th Anniversary of PCWASA, the utility also opened its doors to an open house at its headquarters and Rockaway Wastewater Treatment Facility, located at 1127 Highway 74 South in Peachtree City. Customers attending the open house were able to tour the Rockaway Plant, meet the Authority’s staff, and learn more about the Authority’s projects and processes that are being advanced on their behalf, to improve the PCWASA system.

Among the vendors participating in the Authority’s 25th Anniversary open house were professionals from RedZone Robotics, who demonstrated the use of the Solo robot to inspect the Authority’s sewer lines, manholes, and collection system. In addition, officials from AGL Energy Services were on hand to explain how biosolids are removed and recycled following the wastewater treatment processes at PCWASA, prior to being packaged and marketed to customers as Class A (pathogen-free and safe for public use) biosolids that are ideal for use as a soil amendment of fertilizer for yards or gardens. Finally, PCWASA contractors at Brent Scarbrough & Company and Ca-Jenn provided a cured-in-place pipe lining demonstration.

“We were very excited and pleased by the turnout and level of participation from the public, our customers, our employees and board, as well as vendors and fellow water industry professionals, during our anniversary event,” says Stephen Hogan, PCWASA General Manager. “This was a significant milestone in the history of the Authority, and we wanted to recognize how far we’ve come as a utility in 25 years.”

PCWASA was originally created as the “Peachtree City Water, Sewerage, and Recreational Authority” in 1973 by an Act of the Georgia General Assembly. However, today the Authority operates according to the revised enabling legislation that went into effect on March 31, 1987, following the passage of House Bill 1132, Act 411, which established PCWASA as a legal, public corporation of the state.