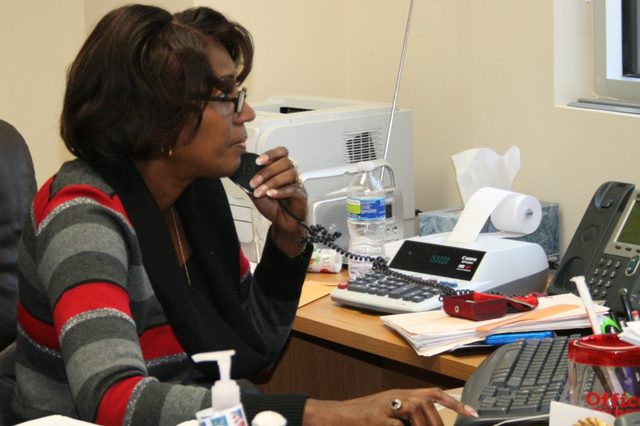 Lynda Price, Business Manager for PCWASA, received praise from the Authority Board for her hard work during the annual independent audit, which resulted in no findings and a clean opinion of the utility’s financial statements.

According to independent auditors who perused the financial statements of the Peachtree City Water and Sewerage Authority (PCWASA) in great detail to complete the arduous task that is an annual audit, the utility is in rare company. It’s one of only a small number of local authorities and governments that had no findings – errors or oversights by omission or commission – in its independent audit for fiscal year 2012.

David Irwin, representing the Authority’s independent auditors at Mauldin & Jenkins, says his firm conducts approximately 180 audits for municipal government clients throughout the state, and PCWASA was among those rare 20 percent that had no findings in the audit of its books from this past year. Irwin presented the Mauldin & Jenkins independent annual audit of PCWASA at the April Authority Board Meeting.

“The audit went very well this year, resulting in a clean opinion, and we didn’t have any audit findings,” said Irwin, during his presentation to the PCWASA Board. “That really is a reflection of the quality of work by the Authority and its staff. You are proactive and not reactive, wanting (financial statements) recorded right the first time, rather than seeking corrections during the auditing process.”

The clean audit opinion from Mauldin & Jenkins reflects the firm’s professional assessment that the financial statements of PCWASA present fairly, in all material respects, the financial position of the Authority, as a component unit of Peachtree City, Georgia, as of the end of this past fiscal year (FY 2012), which was September 30, 2012. Thus, the changes in financial position, and cash flows thereof for the year, ended in conformity with accounting principles generally accepted in the United States.

In lay terms, a clean audit opinion reflects that the auditors obtained reasonable assurance the financial statements of PCWASA are free of material misstatement.

Highlighting specific details of the independent annual audit, Irwin noted the Authority’s operating income of a little more than $3.1 million, with a positive change in net assets of $1.75 million – results that were “quite impressive.”

In addition, Irwin pointed out that cash flows from operating activities, one of the most critical reflections of financial strength of an organization, were up approximately $762,000 from the previous fiscal year. Thus, the positive results of net increase in cash and cash equivalents of more than $1.4 million.

“You should be proud of the strong and healthy cash position of the Authority,” said Irwin. “The Authority is in good shape financially, and in a good position moving forward.”

PCWASA Chairman Mike Harman praised the work of the Authority staff in its day-to-day accounting, as well as the hard work that went into assisting Mauldin & Jenkins with the independent annual audit, mentioning the work of PCWASA Business Manager Lynda Price specifically.

“We’re very fortunate to not have a finding this year, and to have had a clean audit opinion for the past five years or more,” said Harman. “I think this year’s audit is another indication of the sound business decisions we’ve made to assure the Authority maintains a strong financial position for the future, so we can provide the best possible services for our customers.”