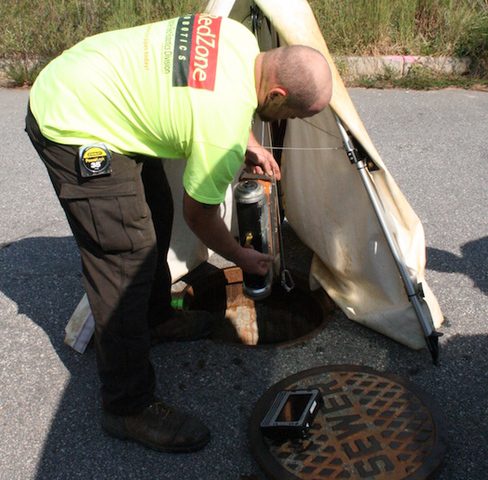 Data collected by RedZone Robotics identified PCWASA manholes in need of repair. The utility then invested approximately $339,000 to rehabilitate 214 manholes within the sewer system.

The Peachtree City Water and Sewerage Authority (PCWASA) continually invests in upgrades to its system, in order to improve the reliability and efficiency of its sewer collection and treatment services for more than 10,500 customers.

The latest evidence of system upgrades comes in the completion of rehabilitation on 211 manholes, which were previously in poor or failing condition. The utility’s manhole rehabilitation project is ongoing, but with this first phase completed, the Authority has addressed some of the most vulnerable parts of its sewer system.

The manholes most in need of repair were identified following a nearly two-year study conducted by RedZone Robotics to assess the condition and functionality of the entire PCWASA sewer system. The results of the RedZone YES (Your Entire System) program allowed the Authority to categorize the sewer system’s manholes according to four conditions – rating them as either good, adequate, poor, or critical.

To categorize those manholes in most need of repair, the PCWASA staff and consulting engineers from CH2M Hill poured through the extensive, detailed data collected by RedZone Robotics. The PCWASA staff brought the additional engineering expertise in for data analysis in order to expedite the first and most critical phase of the manhole rehabilitation project.

In October of last year, following the recommendation of the utility’s staff and project engineers from Integrated Science & Engineering (ISE), the PCWASA Board of Directors awarded the contract for this first phase of the manhole rehabilitation to Enviro Trenchless, LCC. This contractor provided the Authority with the low bid of $339,000, among the five qualifying bids.

Work on the manhole repairs began last November and was completed this summer. Some of the specifics of the contract included surface preparation, manhole leak repair, rebuilding manhole pipe seal, invert, bench and wall when needed, repair of the manhole chimney, including grade adjustment, and providing cement liners and coating. Approximately 5 percent of the manholes within this first phase of rehab needed to be replaced completely.

To assure that sewer services went uninterrupted during the rehabilitation process, the Authority contractors also provided bypass pumping of sanitary sewers in the areas of the system where manholes were under repair.

Authority officials note that the project was completed without incident and within budget, and the results should begin to pay immediate dividends for customers in the form of more reliable performance of the sewer system.

“This is an example of a project that’s out of sight and out of mind for most customers, but no less important to the efficient operation of our system,” says Stephen Hogan, PCWASA General Manager. “I’m thankful for the foresight of our board to allocate the funding to complete this work, and for the dedication of our staff to oversee a long and laborious process – from the collection and analysis of data to identify the condition of our entire system, to the safe and successful completion of this first phase of manhole rehabilitation.”

By investing in the rehabilitation of these manholes that were in the poorest condition, the Authority will improve its wastewater collection and treatment efficiency through the reduction of inflow and infiltration of storm water into the sewer system.