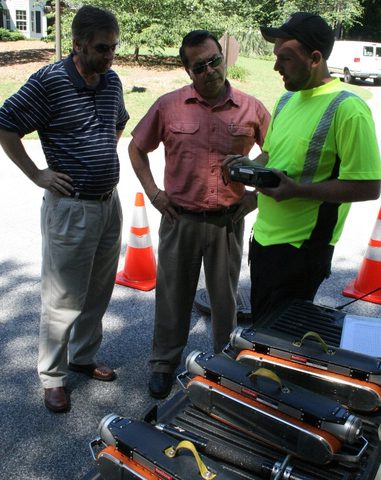 If imitation is the best form of flattery, then the Peachtree City Water and Sewerage Authority (PCWASA) should be flattered from the inquiry it has received from fellow utilities and municipal public works professionals about its RedZone project. This successful initiative to investigate the condition of the PCWASA sewer system, and collect valuable data for prioritizing rehabilitation and capital projects, has the Authority looking like an innovator that others aim to emulate.

This summer, PCWASA officials have welcomed visitors from the governments of Garden City, Georgia, as well as the City of Columbus and Augusta Utilities. They all have come to ask questions about the use of RedZone’s robotics technology, while observing the efficiency and accuracy of RedZone robots in the field. At present, these technological innovations are busy rolling through the PCWASA sewer lines and collection mains to inspect the structural integrity of the Authority’s infrastructure that serves approximately 11,000 customers.

During the PCWASA August Board Meeting, Keisha Lisbon Thorpe, the Authority’s Division Manager of Technical Services, reported that the RedZone project was well ahead of schedule and past the halfway point, as work has been “progressing along nicely and without incident,” she notes. The RedZone robots have been averaging data collection on approximately 5,700 linear feet per day, a pace even more efficient than originally anticipated. To date, the robotics technology has inspected approximately 470,000 linear feet of sewer lines; as a result, RedZone has completed 58 percent of the project, several months in advance of where the project was expected to be at this point.

The Authority joined forces earlier this year with RedZone Robotics, a contractor located in Pittsburgh, PA, which is a hotbed of robotics research and development. Their work featuring the RedZone Solo Unmanned Inspection Robots, which are lightweight systems with onboard intelligence and full coverage tracking, began in mid-April. The robots are able to collect data at such a rate that their efficiency and accuracy is unmatched in the industry, say Authority officials. What will take the robots to collect and inspect in a year, would take more than a decade to accomplish via other conventional data collection and inspection methods, such as manual review or televising lines.

Within the terms of the contract between PCWASA and RedZone, the work has been scheduled for seven days per week, from 7:00 a.m. to 7:00 p.m. Having completed more than half of the inspection and data collection already, the project is on pace to be completed several months prior to the 15-month original timeline. Thus, fellow utilities and water/sewer industry professionals should be mindful of one thing – if they want to see RedZone robots in action within the PCWASA sewer system, they better hurry up. This project is on pace to be completed well ahead of schedule and still within budget.

“We are flattered when others want to see our work, to learn more about the innovations and technologies we are using to improve our system and operations for the benefit of our customers,” says Stephen Hogan, General Manager of PCWASA, who as a professional engineer with industry and utility work experience understands the importance of information exchange between professionals. “We welcomed the recent visits we have had from those interested in our RedZone project, and hope they may gather insights that aid in their decision making in the future.”