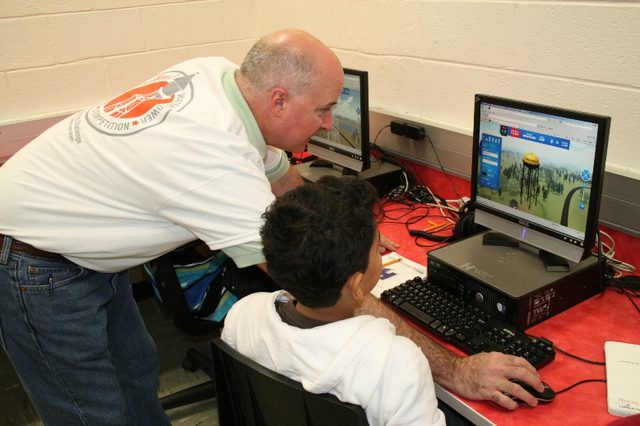 The Georgia Association of Water Professionals (GAWP) and the Georgia Section of the American Water Works Association (GAWWA) sponsored the first state Model Water Tower Competition for students during this past fall term, with the help of the Peachtree City Water and Sewerage Authority (PCWASA) and fellow industry leaders.

The Model Water Tower Competition was organized by a steering committee led by Keisha Lisbon Thorpe, PCWASA Division Manager of Technical Services, and Andy Patceg, an engineer with Brown and Caldwell. In addition, PCWASA General Manager Stephen Hogan was among 25 additional volunteers who worked the day of the event as advisors or judges of the competition.

The water towers constructed and submitted by the middle school students contestants from metro Atlanta were judged according to their structural efficiency, cost efficiency, hydraulic functionality, and design ingenuity. The event featured entries from 40 students from the 7th and 8th grades who gathered at Woodland Middle School in Stockbridge for the competition.

This first annual event provided an opportunity for middle school students to design and build a water tower out of household items. The goal of the friendly competition is to educate students about the water treatment process and the importance of properly designed and operated infrastructure, with the water tower serving as an example. Event organizers hope the success of this year’s event will facilitate growth in the number of students and schools wanting to participate in future competitions.

“This is a fun way to educate students about our industry and its role in their community, while challenging them to think about the importance of water and sewer as public services, in addition to encouraging them to consider a career in the profession,” says Jack Dozier, Executive Director of GAWP.

The Model Water Tower Competition was started by the Florida Section of the American Water Works Association in 2004. Since that time, a number of states have sponsored similar competitions, with the Georgia section of AWWA and GAWP joining the ranks in 2012.

“We were excited about the opportunity to help organize the first statewide Model Water Tower Competition in Georgia, because we saw this as an opportunity to educate our young people about what we do and its importance to their everyday lives,” says Stephen Hogan, PCWASA General Manager. “If we also can help them gain an appreciation for science and the water and sewer industry, they’ll be prepared to oversee the community’s infrastructure when that time comes in their future.”

Check out the photo gallery from the student Model Water Tower Competition on the “Learn More” link below.