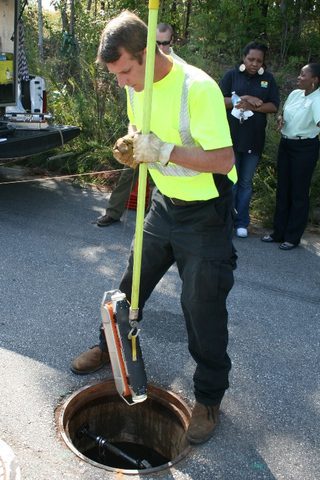 An example of system repairs that were considered urgent as a result of data collected through the RedZone YES Program condition assessment is the rehab work on an 8-inch sewer line that was completed recently at Commerce Drive.

The buzz of the many RedZone Solo Unmanned Inspection Robots that traversed the PCWASA sewer system has been replaced by the hum of computers that have been carefully analyzing the video and related data collected.

As the RedZone YES (Your Entire System) Program nears completion in Peachtree City, the Authority will be rehabilitating manholes and sewer lines within the PCWASA system according to a schedule that follows maintenance priorities, with facilities in the worst condition receiving immediate attention from crews in the field.

During this fiscal year, the Authority has budgeted approximately $365,000 to rehabilitate all 78 manholes that are in the worst of the various conditions. In addition, dollars will be available to rehab 100 of the 689 that are in fair condition. Over the course of the next few years, PCWASA will be able to rehabilitate all of its existing manholes in need of repair.

In addition to completing the condition assessment of PCWASA manholes, the Authority and its consulting engineers from CH2M Hill will complete the data analysis on the condition of all of the system’s sewer lines – a report that should wrap up this spring.

However, as the results of the condition assessment have come in, the Authority has moved forward with rehab of sewer lines that were in dire need of repair. An example of rehab work identified by the RedZone Program is the pipe bursting and pipe replacement project that has benefitted approximately 50 residents in the Pebble Stump area of the West Park basin. This portion of the PCWASA system used to contain older clay pipe that dated 50 years – a time prior to the Authority’s founding as a utility to oversee the sewer system for the citizens of Peachtree City.