PCWASA ELECTS OFFICERS TO LEAD THE UTILITY THIS YEAR 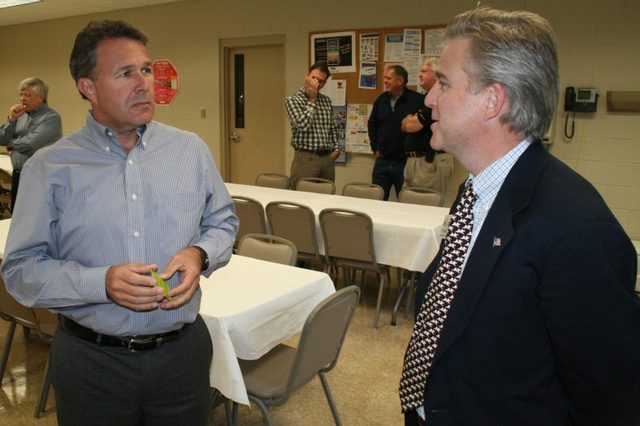 Mike Harman (left) was elected by his fellow PCWASA Members to serve another term as Chairman of the Board.

Following the recent appointments of three new board members and an alternate to the Peachtree City Water and Sewerage Authority (PCWASA) by the City Council, the Authority Board elected a new slate of officers to serve in their respective leadership capacities for the remainder of this year, unless the composition of the board changes prior to that time.

The new slate of officers was elected by unanimous vote, with Mike Harman asked to continue service as Chairman, while Phil Mahler takes the reins as Vice Chairman and newcomer Terry Garlock accepts the role of Secretary/Treasurer. Harman and Mahler have extensive experience on the PCWASA Board, as the two are the only holdovers from last year who are in the midst of their respective terms. Garlock, who fills the unexpired term of former PCWASA Member Vanessa Birrell, joins John Cheatham and John Harrell, who fills the unexpired term of former Board Member Luis Valencia, as newly appointed members joining the Authority in March, along with Alternate Board Member Bill Holland.

The current PCWASA Board brings diversity in professional experience to this avenue of public service, which excites the Chairman, who actively encouraged fellow citizens to volunteer for those board seats that had been vacant since January.

“I’m honored to be asked to continue service as Chairman of the Authority Board, and I will do my best to engage all board members in the critical policy decisions that we will face in the future,” says Harman. “I think we have a great group, and I look forward to working with each of them. I believe we have things headed in the right direction, evident in the projects we have underway to improve the system and enhance services for the citizens of Peachtree City. I hope we can continue the positive momentum we have developed in the community, especially since our 15th Anniversary last year.”

Chairman Harman is the Manager of Municipal Sales for Biorem, a company that provides air pollution control technology and equipment for wastewater treatment processes and other industries. Thus, his professional experience within the wastewater industry is invaluable to his leadership role as Chairman of the PCWASA Board of Directors.

PCWASA Vice-Chairman Phil Mahler has resided in Peachtree City since 2006, after his retirement as a federal agent who performed and supervised audits of businesses for the U.S. Internal Revenue Service. Secretary-Treasurer Terry Garlock has been a resident of Peachtree City for approximately 20 years, with professional experience as a Certified Financial Planner who has served businesses in a number of capacities, including consulting, auditing, as well as in regulatory, investigative, and executive capacities.

The Peachtree City Water and Sewerage Authority meets on the first Monday of each month at 6:30 p.m. at the utility’s headquarters office, located at 1127 Highway 74 in Peachtree City. Board meetings are open to public, as Board Members encourage and welcome citizens of Peachtree City to attend. For updates on board meetings and more, citizens can log onto the “Resource Center” and other pages of this Web site (www.pcwasa.org).