Standard & Poor’s (S&P) Global Ratings has raised its issuer credit rating (ICR) on the Peachtree City Water and Sewerage Authority (PCWASA) from “AA-“ to “AA+” while noting that the future financial outlook of the utility is stable.

This upgrade in the PCWASA bond rating reflects what S&P calls a combination of an “extremely strong enterprise risk profile and a very strong financial risk profile.” The upgrade also reflects the S&P’s opinion that PCWASA has very strong economic and financial metrics, when applied to the S&P revised criteria for utility bond ratings referred to as the “Rating Methodology and Assumptions for U.S. Municipal Waterworks and Sanitary Sewer Utility Revenue Bonds,” published earlier this year.

According to Primary Credit Analyst Scott Withrow, this upgrade in PCWASA’s overall credit rating reflects S&P’s opinion of the Authority’s overall financial capacity, or creditworthiness, to pay its financial obligations.

S&P concluded that PCWASA has a very strong enterprise risk profile because of four factors. First, the utility’s service area is broad and diverse, and second, the Authority has very low industry risk because it’s a provider of an essential public utility. Third, the utility has affordable service rates in the context of the service area’s income levels, and finally, PCWASA benefits from good operational management practices and policies.

The very strong financial risk profile of PCWASA, according to S&P analysts, is attributed to four characteristics of the PCWASA system.

First, PCWASA has extremely strong historical all-in coverage metrics that are expected to continue in the future, and second, the Authority also has a very strong liquidity position. Third, PCWASA has a moderately high debt-to-capitalization ratio of about 58 percent, with no additional debt plans in the future, and finally, the Authority benefits from good financial management practices and policies.

Although the Authority’s unrestricted cash reserves are used to fund ongoing capital improvements to the PCWASA sewer system for better delivery of services to the utility’s customers, S&P noted that PCWASA is expected to maintain reserves at levels that are considered very strong in the near future, even when paying for capital projects with cash flow rather than taking on additional debt.

“We are extremely excited to receive this upgrade in our bond rating,” says Stephen Hogan, PCWASA General Manager. “We’ve come a long way over the course of the past several years, working hard to improve services while operating in a fiscally responsible manner. Our Board has provided great leadership and oversight, which has equipped our Staff with the resources to warrant this most recent favorable bond rating.” 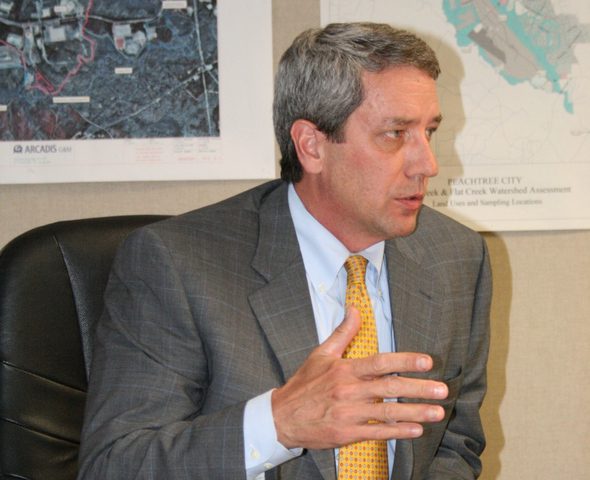 Todd Barnes, bond underwriter for the Authority from Robert W. Baird & Co., Inc., says the Authority’s Series 2013 bonds sold well because of the excellent credit ratings and the scarcity of other Georgia issues in the market at that time.

Just as homeowners look to refinance mortgages to take advantage of historically low interest rates, so too does the Peachtree City Water and Sewerage Authority (PCWASA), which has turned to the current bond market to refinance its long-term debt.

PCWASA recently closed on its Series 2013 Bonds, rated “Aa1” by Moody’s and “AAA” by Standard & Poor’s thanks to the backing of the city of Peachtree City. The Authority has refinanced nearly $28 million – its entire outstanding long-term debt – which was the result of necessary construction and upgrades to the city’s sewer system during the past decade.

The Series 2013 Bonds took advantage of a most favorable interest rate due primarily to the credit rating of Peachtree City Government. However, the Authority obtained its own favorable credit rating – the first time the utility had been rated in its 25-year history – a month prior to the closing. As a result of the City-Authority partnership in the issuance, PCWASA and its ratepayers will benefit from a total debt service savings of $3.06 million – which equates to a net present value savings of $2.86 million – over the course of the 14-year term of the bonds, for an average annual savings of $220,000 per year.

In addition, another key benefit of the refinancing is that the Authority will be able to eliminate the requirement to maintain a debt service reserve fund for the bonds, which will enable PCWASA officials to “free up” approximately $1.15 million that had been restricted as a debt service reserve for the 2002 Bonds, says Stephen Hogan, PCWASA General Manager.

The PCWASA Series 2013 Bond Issue includes a little more than $7.1 million in Refunding Revenue Bonds (Series 2013A) and approximately $20.8 million in Taxable Refunding Revenue Bonds (Series 2013B). The 2013A Bonds are refunding the Authority’s previously issued Series 2002 Bonds, while the 2013B Bonds likewise are refinancing the Series 2005 Bonds. As a result, the Authority’s entire outstanding debt is now consolidated through the Series 2013 Bonds.

The Series 2013 Bond Resolution was passed by the PCWASA Board of Directors during a special called meeting on Jan. 30, with the City Council of Peachtree City approval coming that same day. The bond sales were immediate and successful, say Authority officials, with the bond closing on Feb. 27.

“There was strong investor demand for the bonds due to the excellent credit ratings and the scarcity of other Georgia issues in the market at that time,” says Todd Barnes, bond underwriter for the Authority from Robert W. Baird & Co., Inc.

Barnes adds that because of the good timing of the bond issue, the Authority yielded even better savings than originally projected. At the time PCWASA officials first began preparations for the bond issue last fall, the refinancing would have originally saved approximately $50,000 per year, rather than the $220,000 in actual savings from the closing at the end of February. The Authority was able to reduce the average interest rate on its debt from around 4.4% on the prior bonds to roughly 2.2% on the new bonds, notes Barnes.

During the credit ratings process completed in January, PCWASA officials learned the good news that Standard & Poor’s had issued a credit rating of “AA-” to the Authority. Barnes says that this is a high investment grade rating, reflecting the “financial strength and economic vitality” of PCWASA.

The Standard & Poor’s issuer credit rating (ICR) for PCWASA was based on several factors, including the utility’s system resources and ability to accommodate future growth, its strong liquidity (cash) position, and its strong coverage margins, which was 1.58x for the 2012 fiscal year. Bond covenants require a minimum coverage ratio of 1.10x, or 110%. Authority officials note the rate increase implemented in late 2010 was necessary in part to assure the minimum debt coverage ratios for PCWASA bonds complied with bond covenants.

With the Series 2013 Bond Issue closed, PCWASA officials now can look to the future maintenance and improvements to its sewer system for the residential, commercial, and industrial customers in Peachtree City, says Hogan. According to the Ratings Analysis provided by Standard & Poor’s, the Authority’s financial future appears to be a bright one. The report noted that the stable future outlook of the Authority reflects the expectation that PCWASA will sustain a solid financial and operating profile, while formulating and managing its capital improvement plan for the future.